Our team arrived in Guatemala City on Thursday morning after a non-stop redeye from LAX, weary but ready to get to work. The first order of business was to meet Oswaldo Vasquez, an old friend of our trip leader, 2nd degree Black Belt Erik Klinger. Oswaldo trained under Erik for years in the United States before returning to Guatemala for personal reasons. Now, he teaches jiu-jitsu to the kids of Xela completely free, receiving a monthly stipend from the International Jiu-Jitsu Education Fund to compensate him for his dedication to children’s jiu-jitsu.

Oswaldo took a five-hour bus ride – about as long as the flight from Los Angeles – through the mountains to meet our team in Guatemala City!

It was a joyful reunion for Oswaldo and Erik, a pair who had trained and taught together during Oswaldo’s time in the States. Now, they were together again in pursuit of their shared passion: bringing jiu-jitsu to children.

After meeting Oswaldo, the team linked up with a new friend of IJEF, Marinho. A blue belt in Gracie jiu-jitsu, Marinho uses his talents as a writer to render how “jiu-jitsu is lived in in Guatemala.” For more on the martial arts scene in this Guatemala, check out his fantastic blog, Guate BJJ at www.guatebjj.com.

AT THE CASTILLO ACADEMY

With Oswaldo and Marinho as guides, the team set off for the Castillo Karate School, a beautiful 2,700 sq. ft. martial arts gym in Zona 11 of Guatemala City. Founded by jiu-jitsu purple belt and Kenpo Karate black belt Jorge Castillo, the school is focused on MMA, Kenpo Karate, and Brazilian Jiu-Jitsu training. You can meet the gym over at Guate BJJ!

Professor Castillo and our friends at the Castillo academy were gracious enough to welcome us onto the mat and allow Professor Erik to teach a jiu-jitsu seminar to the students. With 25 training, another 25 looking on, it was a great time for all.

The seminar group at the Castillo Academy.

Erik showed some guard passes and submissions from side control before the group broke into open mat. The Castillo gym has a terrific program – our project manager, Ben College, learned that the hard way when he got caught in a rear naked. After open mat, the newly acquainted teams exchanged shirts and rash guards and took plenty of photos for posterity!

But the Castillo academy seminar was not the last chance we would get to train and teach around Guatemala City. On Saturday, the crew headed to Gracie Barra Condado Naranjo Academy in Mixco, a sister city to Guatemala City.

The Gracie Barra academy is headed by Professor Lazaro Murcia, a purple belt in Brazilian Jiu-Jitsu. He welcomed Professor Erik to teach a seminar to the academy’s enthusiastic students.

In addition to the fine members of the Gracie Barra academy, our team met Otto Estuardo Schumann, one of the founders of the Guatemalan martial arts community who had heard we were in town and dropped by the Gracie academy to say hello. Based in Westlake, California, Otto teaches basic jiu-jitsu to police forces throughout Southern California, but he preserves his passion for his home country, Guatemala. He shared with us his plan to open a massive 14,000 sq. ft. academy for jiu0jitsu and Kenpo Karate in Guatemala City. We sure hope to stay in touch! 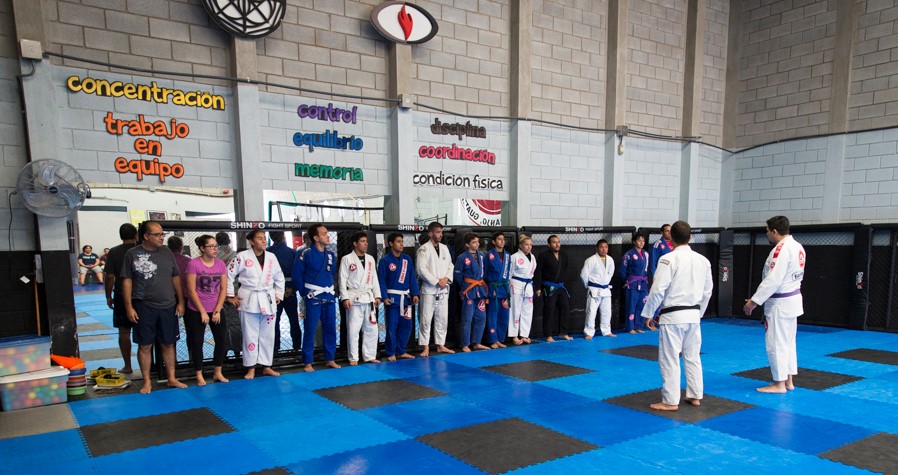 After open mat at Gracie Barra, our team was ready for the next leg of the journey – visiting Oswaldo’s home in Xela (known also as Quetzaltenango) to bring uniforms to the children of his village. They were in for another surprise, however, when Professor Murcia offered to donate stacks of his extra foam mats for us to bring to the kids of Xela.

His contribution was a firm reminder of how much our work relies on the kindness of Brazilian Jiu-Jitsu and martial arts communities throughout the world. The difference between training on concrete and training on mats for 20 children was erased with a single generous gift. This is why we love what we do!

The team showered, stuffed the mats and all six passengers into a taxi, and set off on the five-hour drive to Xela.

Read about our time at Oswaldo’s academy in Part 2!