An essential part of the International Jiu-Jitsu Education Fund (IJEF) mission is delivering support to our jiu-jitsu instructors (we call them “Roll Models”) around the world. 2017 featured trips to our Ecuador and Guatemala projects, in which we delivered uniforms to the kids and training to our Roll Models.

In November of 2017, our team flew to Guatemala to bring suitcases full of T-shirts and uniforms to the children of La Esperanza, a beautiful mountain community on the outskirts of Guatemala’s second largest city, Quetzaltenango. Onboard for this mission were: IJEF founder Professor Erik Klinger, Los Angeles Project Roll Model Alex Karimzad, and IJEF Editor Warren Szewczyk.

The three left Los Angeles on Thanksgiving, right as most Americans were diving headfirst into stuffing and turkey — and they enjoyed an almost-empty LAX airport! Nearly 20 hours later they were in Guatemala and off on a 6 hour drive to meet Oswaldo in his home city.

Arriving at night, the group was greeted by some frigid mountain weather and about 20 heavily-armed police officers. But the team wasn’t in trouble. Instead, the officers had come for a special self-defense seminar taught by

Erik! The group worked on defending against knife attacks and assaults from behind. Their commander even required that all the cadets be choked out (safely, of course) so they wouldn’t experience it for the first time in the field! 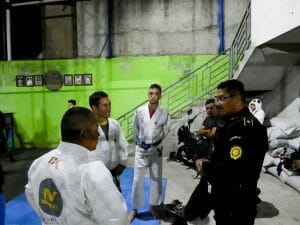 Chief Martinez explains the training he wants for his cadets.

The next day, the IJEF team returned to teach a couple seminars with the kids of Oswaldo’s academy and to hand out uniforms to new and returning students. Oswaldo has put in a ton of hard work since the last time we saw him, and the results are obvious! His academy has moved from a dirt floor in his own home to a nearby recreation center.

The team’s final day was special — a number of women from the community came together to cook a huge lunch for the kids and our IJEF staff. We were so grateful for the hospitality, humility, and thanks this community showed us. After lunch we had an incredible training, filling Oswaldo’s mat with as many kids as possible. It was truly a special moment, as the “veterans” of Coach Oswaldo’s academy were called on to teach the newcomers the basics of jiu-jitsu. They responded as expected — with plenty of enthusiasm to help their fellow kids!

But the day was not over. Following the seminar, the IJEF team handed out T-shirts — donated graciously by the Sport Jiu-Jitsu International Federation and the North American Brazilian Jiu-Jitsu Federation — to each and every child in attendance. Then, with his family looking on, it was time to surprise Coach Oswaldo  — with his purple belt! He could hardly believe it.

“It’s like a dream,” he said, fighting back tears. “To make a life out of jiu-jitsu.”

We can’t wait to see the places this academy will go in 2018! 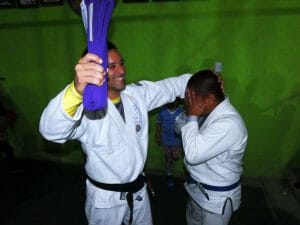